After hearing that the Municipal Bank on Broad Street was opening its doors for a 3-day contemporary art exhibition I was really keen to see inside a historic building that is normally locked up and is often used as an extension of the bus stop! PhD student, Carly and I dashed through the rain into the very chilly former bank. It was a fantastic experience and was certainly worth the numb hands and feet! 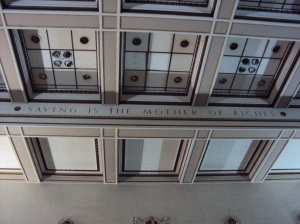 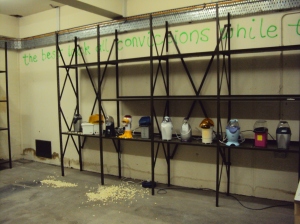 The exhibition ‘Thrift Radiates Happiness’ – organised by the contemporary art gallery, TROVE and international design practice, Aedas – was a response to the grand architecture of this empty, former bank. All of the exhibits related to money and were quirky and thought-provoking. The displays and installations would only really have meaning in this particular setting. By entering an abandoned space that was once a financial hub which but had become derelict, there seemed to be an underlying comment about the current state of the economy. The works that filled the empty office spaces questioned the value of art and the relationship between culture and commerce. 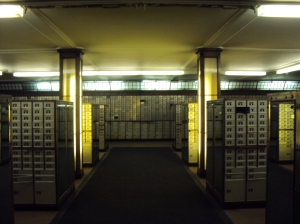 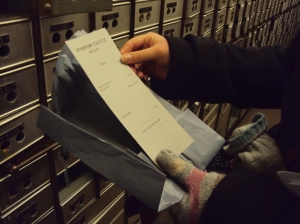 In the vaults we were offered the opportunity to make an investment of £2. We would find in our deposit box either a photograph of the bank from the archives or an original work of art, and the idea was that our investment would immediately go up in value. It was very exciting… Carly had two photographs of the vaults and I opened my box to find a print by Sparrow+Castice. 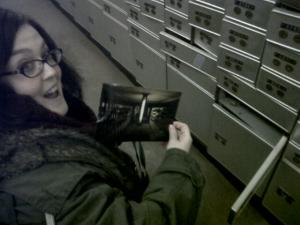 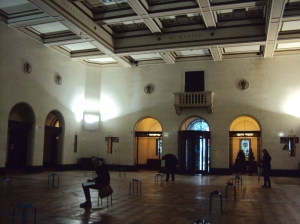 As part of the project, oral histories from former bank employees were recorded and available to listen to in the grand hall of the bank. This was a brilliant way of using the space; let’s hope that the bank re-opens its doors for more exciting pop-up events!

What do we want from art? 🎨Thank you for all your responses!! #philsophyseries #uob
Trying out any new looks in lockdown? Check out Wenceslaus Hollar’s ‘Queen Henrietta Maria’ (1641) in the @barberinstitute Works on Paper collection #curlygirlmethod
Loving learning more about Sofonisba Anguissola in ‘Seeing Ourselves Women’s Self Portraits’ by @francesborzello #coffeetableseries #womenartists #sofonisbaanguissola
Get to know the History of Art students! Considering studying BA History of Art at UoB? Swipe left on the photos to find out more about our student’s highlights, top tips and dissertation topics! ——> Jen! #UoB #birmingham #Arthistory
Taken up any new hobbies? We are loving Nicholas Lancret’s ‘A Man Playing a Hurdy-Gurdy’ (1720s) in the @barberinstitute #arthistory #barberinstitute #hobby #museumsfromhome
What galleries are you missing? We can’t wait to be back at the @ikongallery until then check out their amazing website! #artinthetimeofcorona #artonline #birmingham #birminghamart