That man up there, the Antiques collector Stephen Hibberts, reckons he has unearthed a lost painting by Raphael. Depicting the moment Christ told the Magdalene not to touch him following His Resurrection — a subject known in art history by the Latin words Christ is said to have uttered, “Noli me tangere” — Hibberts found the painting some years ago at an art fair in Avignon. Back then, it was, or so The Telegraph reported, lying on the ground, a much-maligned, and literally downtrodden picture, purported to be some detritus of some unknown period in art history from the hand of some unknown artist who harboured a penchant for producing pictures that resemble the Old Masters.

Yet despite these inauspicious circumstances, when Hibberts saw it, he liked it; specifically, he liked “its gothic and rustic appearance”. So he bought it, despite it not being “in the best of nick” (the latter, alongside “rustic,” being a poetic way of describing this picture, which, it must be said, is in horrible condition):

“I didn’t think it would be worth much at all. I’m a realistic man,” Hibberts said in a statement last week, reflecting on the acquisition. “I’m aware,” he added, “that it is sometimes tempting to see things that aren’t there, that you see things you want to see.” Quite shrewd.

Unfortunately, however, it does seem that Hibbert has now decided to see things he wants to see, because he has since decided that his painting, the one he found lying on the floor somewhere in Avignon, is not only from the sixteenth century, but is in fact a lost Raphael!

The story goes like this. Hibberts allowed experts at Sotheby’s, The National Gallery and at Oxford and Cambridge to examine his work. They verified his initial inklings: this isn’t anything special. Their expertise yielded the view that this work probably comes from the Victorian period, when it was all the rage for artists to look back to the examples provided by Italian Renaissance art. But Hibberts didn’t give up; clearly, he’d decided that the picture he owned was something else entirely (on what basis he came to this view is for him to disclose). So he sent it to Bradford University, to try and date it. They examined the picture using Raman spectroscopy and microspectroscopy, in order to identify the pigments used in the painting. The findings were published in the Transactions of the Royal Society A.

The science has shown that the pigments used in the paint, and the way that the canvas was prepared and worked on, are thoroughly consistent with what we should expect for a picture produced during the Renaissance, around 1500. Crucially, to quote from the report, “No trace of any synthetic pigment that appeared post-Renaissance” were identified, which, “when taken with the obvious lack of restorative procedures, implies strongly that the painting is correctly placed as an artwork executed in the Renaissance period.” So far so good. It seems permissible — though it’s not necessarily a done deal just on those bases — that Hibbert does now own a sixteenth-century painting.

But the sting in the tail comes from the next objective: “It now remains to try and attribute this painting to a particular artist.”

This question is tackled in the tellingly entitled “Artistic Epilogue”, as if it is the case that when wrestling with matters of attribution works of art only come in with only secondary importance. We’re dealing here, again, with art history that does science first, and art history second. And adopting the Morellian approach to connoisseurship, the study hones in on “perhaps the most significant feature of this painting,” which is “the polydactyly of the Christ figure”. Christ does, it seems, have one toe too many on the right foot.

They say that this is a characteristic motif used in the Renaissance period, particularly by Raphael. They adduce examples to that end (listed in the report). They also add that several variants of the composition represented in their painting exist from the later sixteenth century. These include an engraving by Maarten de Vos (1582), a painting by de Vos, an engraving by Johann Sadeler (which they present as being somehow distinct from the de Vos print, whereas it is actually after de Vos, viz. is based directly on that print, as the inscription “M.de Vos inuentor / Joannes Sadler scalps” announces), as well as a few other later works from the seventeenth century. Below is the de Vos painting (I think … hard to get hold of) and the Sadeler print:

What seems fairly clear is that all of these compositions do somehow relate. There are significant differences between each of them, but, in general terms, the compositions match up. So what does tell us?

Strictly speaking, what it tells us is that in around 1582, a composition was (re)produced as a painting and an engraving by de Vos and Sadeler. What is doesn’t tell us is that Hibberts’s picture is the prototype on which de Vos and in turn Sadeler based their own works; that is a leap too far on the basis of the evidence currently available. And certainly it does not tell us that Hibberts’s picture is not only the prototype, but is in fact the prototype produced by none other than Raphael. Indeed, if one of, if not the, most important elements in the painting here in question is the extra toe, then that importance was apparently lost on de Vos and Sadeler, who omitted this apparently essential, and essentially Raphaelesque, element. Why can’t it be that the painting is after de Vos’s print, just as Sadeler’s is? After all, all the comparable works adduced in the study date from 1582 and after, which suggests that the prototype originated at around that date. Why can’t it have been de Vos’s 1582 print? De Vos being, at this point, very much alive and kicking, whereas Raphael had been dead for sixty-two years.

A possibility, of course, is that the supposed Raphael turned up at about this time (1582) and was the catalyst for all this, but that’s something that needs to be researched and explained. But even this, if it can be proven — and it is probably an unanswerable question — raises another troublesome question: if a Raphael painting had shown up in, let’s say, 1580, then why isn’t de Vos’s print signed “Raphael inuentor”? As Sadeler’s engraving makes clear, it is de Vos who invented the composition. It simply can’t be the case that de Vos and Sadeler would’ve missed out on the lustre that Raphael’s name adds to a print if they really were based on a painting believed to have something to do with Raphael.

And more to the point, can anyone actually plausibly say that the painting looks like a work by Raphael? This business about Christ’s polydactyly is hardly compelling in and of itself. Do the figures, for instance, actually look like figures designed by Raphael? Isn’t it problematic that de Vos’s figures look more Raphael-like than do the figures in the painting that we’re supposed to believe is by Raphael? Let’s remember that Hibberts acquired it — despite it being such an unremarkable work — because he liked its elegant “gothic” character; it almost goes without saying that Gothic isn’t a term usually invoked to characterise a picture by Raphael! (Heinrich Wölfflin would’ve bridled at the thought!)

To that end, the study’s claim that the painting, and the composition more generally speaking, has a Florentine origin is baffling to me. The evidence, they say, or so it seems, is that the view of “Jerusalem” in the background is actually Florence: a topographically accurate view of Florence as it appeared in the sixteenth century from the hill outside the city on which San Miniato al Monte stands, in fact. This is what that view looks like, from slightly lower down the hill, at Piazzale Michelangelo: 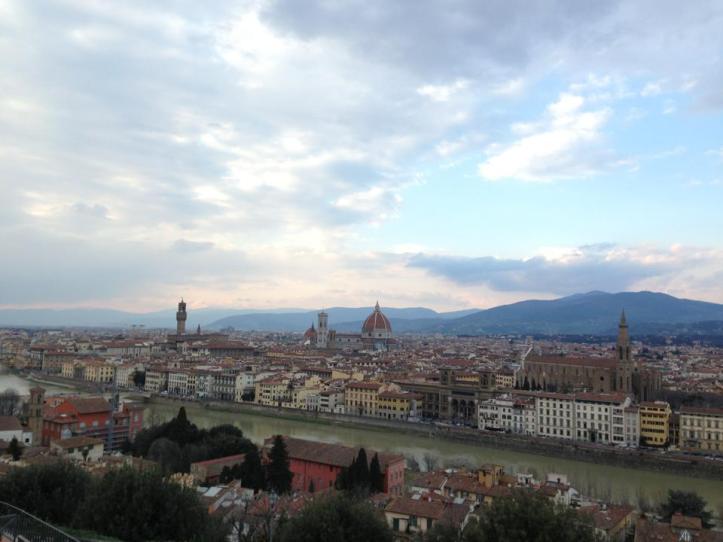 The painting, it’s true, has suffered extensive losses in the background, in the crucial places, and the reproductions available aren’t clear, but it is hard to see that the background really does include a topographically accurate view of Florence. This is clearer from the engravings, supposedly made after the painting in question. The backgrounds here simply do not look like Florence: the Synagogues in both may resemble the profile of the Duomo in general terms, but not precisely; and the Synagogue as it is glimpsed there is really of a rather generic type, familiar from many a picture. And based on what we can make out in the reproductions available to us, the painting likewise features only a Duomo-esque building, but other, key distinguishable buildings — absolutely central to identifying a townscape as Florence — appear to be missing: Palazzo della Signoria? and, orientation depending, Santa Croce? And at any rate, it’s not as if there’s a special or peculiar link between Florence and Raphael: he being a peripatetic artist who nevertheless lived in Rome from 1508.

All told, the idea that a new Raphael picture has been discovered has, as always, been reported with extraordinary gusto and enthusiasm. But the excitement, and blind optimism this generates, has tended to mean that the glaring problems have been downplayed if not overlooked entirely. So what do we know? We know that Hibberts has inadvertently acquired a sixteenth-century painting, the composition of which is known from other works including prints. But that’s not quite the same thing as discovering a Raphael ….