A week in Prague

Each year, 2nd year History of Art students embark on a University-funded, week-long study trip to a European city, in order to study its art, architecture and culture up-close. In the past, students have visited, among other cities, Rome, Berlin, and Brussels. Last year, however, the destination was Prague. Just weeks ahead of the current 2nd years heading off on their trip, here is Rebecca Savage reviewing her week in Prague last year ….

February reading week rolled around again and, with it, the much anticipated History of Art second year field trip, which each year sees a group of excited students set off to explore art a little further afield! 2016’s trip took us to the beautiful city of Prague in the Czech Republic, led by Professor Matthew Rampley, lecturer (and 2nd year personal tutor) Claire Jones and PhD student Sara Tarter. The trip is a core component of the second-year curriculum and is fully-funded by the University.

Prague is a city famous for its range of architecture which tells the story of the country’s complex political history, moving from Habsburg rule to the Austro-Hungarian empire and later Communist Government, all of which have made a lasting impression on the city: its streets, buildings, monuments and institutions. The sheer diversity of the city became obvious to us the minute we arrived by coach, in the low light of the evening, and, despite our tired eyes and rumbling stomachs, we were all struck by the range of buildings, bridges and statues that were there waiting to be explored. 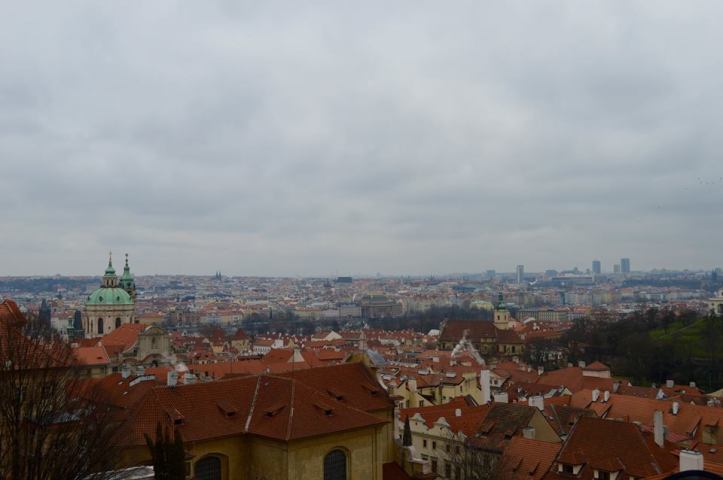 Bright and early the next morning, after a somewhat bizarre hotel breakfast – I observed at least two fellow visitors topping their porridge with cold meat and eggs – we headed out to explore the city some more, hopping on a tram to take us into the centre. Matthew led us on a tour of the older areas of Prague, taking in sights such as Old Town square which features the famous Jan Hus monument and the astronomical clock (which Matthew dismissed as “too touristy”).  Day one also featured a steep uphill trek, which despite the chilly weather and our aching legs, offered us one of the best views of the city (above) and the opportunity to visit the St Vitus Cathedral, and to view the changing of the guard outside Prague Castle! 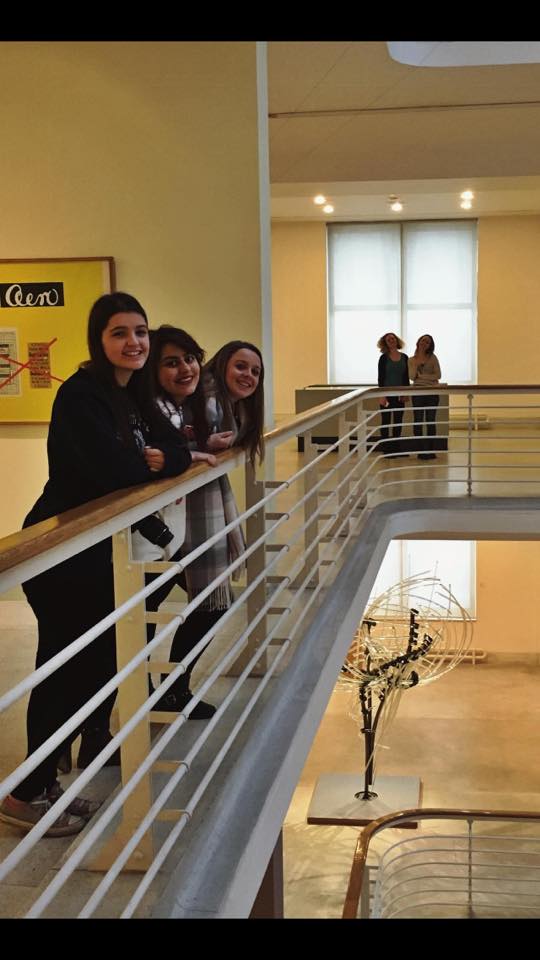 In contrast to the older areas visited on Tuesday, Wednesday gave us the opportunity to see some of Prague’s modern features, and to visit the National Gallery. Housing a collection of over 2,300 works, displayed over three floors, the gallery contains a number of Czech and European works from the 19th and 20th centuries. On the ground floor the gallery currently houses the monumental Slav Epic, created by Alfons Mucha between 1910 and 1928 and which represent the history of the Slavic people. Comprising twenty enormous canvases — each around 13 feet tall — they were, despite their mixed reputation amongst Czech nationals, perhaps the most memorable works from our visit to the National Gallery. Interestingly the gallery was also then exhibiting  Al Wei Wei’s Zodiac Heads, which I thought were made all the more impressive by the snow storm that surrounded them when we arrived: 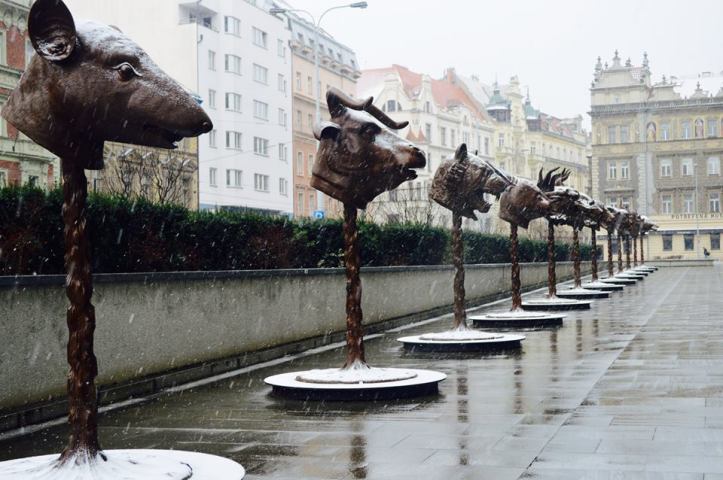 Thankfully the snow had cleared by Thursday, which saw us undertaking our second walking tour of the city, this time focusing on Prague’s modernist architecture, beginning with Wenceslas square. As with our tour earlier on in the week, this walk saw us considering and discussing a dizzingly-vast array of different sorts of buildings, all exhibiting such remarkable diversity in architectural styles. Highlights included the Hotel Jalta: a boutique hotel from the communist era which boasts a nuclear bunker and socialist statues as decoration. Matthew also pointed our attention to the statue of Wenceslas square’s eponymous king, a controversially parodic work by artist David Černý (an artist famous for his subversive works including the The Piss Sculpture in front of the Franz Kafka museum and the Olympic London Booster Bus): 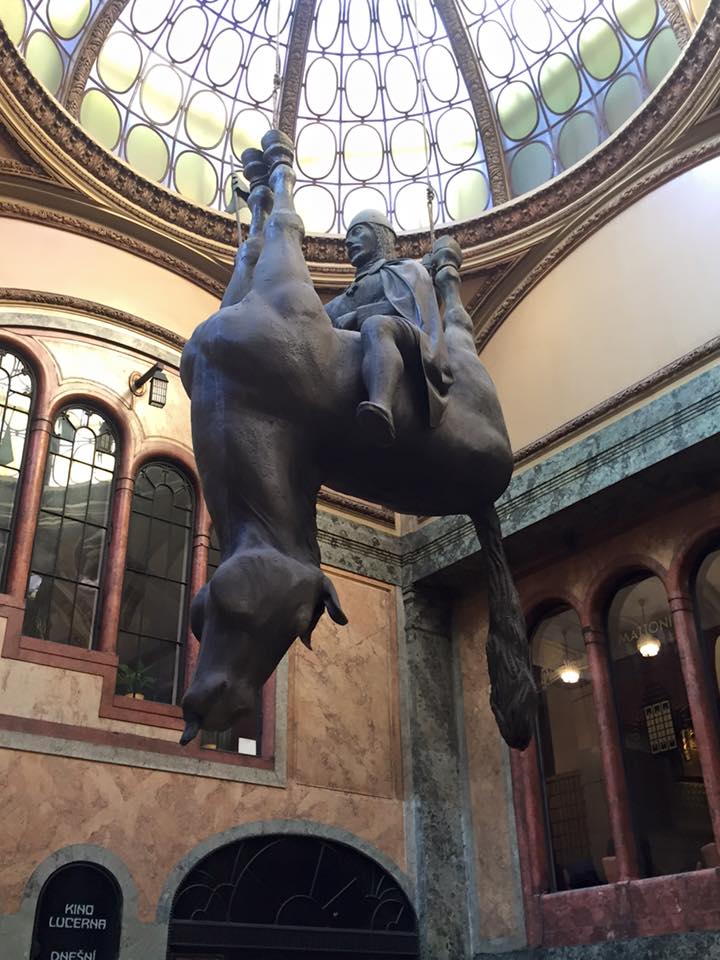 On Friday a group of us embarked on a walk up to the National Memorial on Vitkov Hill. Originally built as a monument to Czechoslovakian legionaries, and later used to promote the communist regime, the memorial was opened to the public by the National Gallery in 2009 — although it still maintains some of its previous sinister gravitas.  On Friday afternoon we visited the Municipal House and its Art Nouveau exhibition. Again this offered us another side to the city’s artistic legacy and rich holdings, featuring glass, fashion and furniture which often get otherwise overlooked. 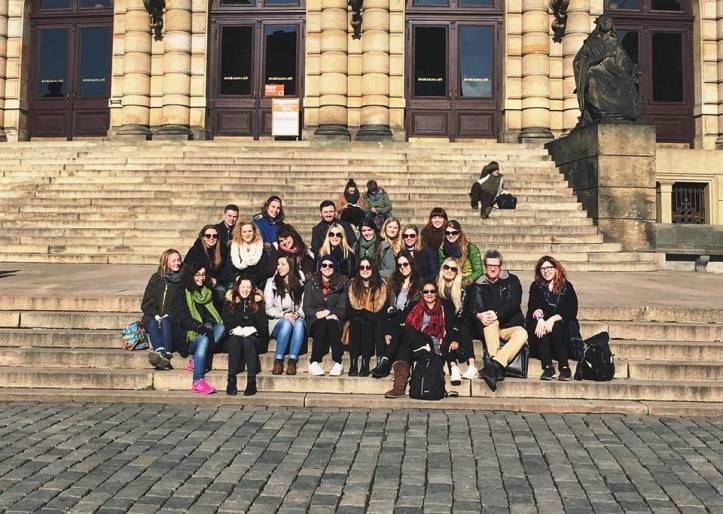 Alongside all the key visits just described, we also had ample opportunities to explore the city for ourselves, in our own time, taking in places of particular interest to each of us. This was particularly important as the trip will form the basis for our own research project, which generated an assessed presentation delivered in the Summer exam season. Indeed, the point of the trip is to identify the subject of your presentation, usually a work of art or architecture, then spend as much time as possible studying it at first hand, whilst still in Prague itself. For nothing compares to studying art objects in real life, and that is one of the joys of the trip!

However, studying works of art and buildings up close wasn’t the only joy and it wasn’t all academic study. We experienced the city’s other important offerings and highlights – cheap beer, hot wine and soup in bread bowls amongst them. We got lost on the tram and metro system; and let me tell you that, besides all the museum-going and walking, nothing gets you bonding with your peers quite like trying to figure out how, in planning to go from A to B on the metro, we’d actually ended up at Z. Another highlight was getting to know the lecturers more, and have fun with them exploring a foreign city. As cheesy as it is to say, I know that some of my fondest memories of being an art history student at Birmingham, as well as my closest friendships, were formed on the study trip to Prague.